March, 2011: Bob Ellis and Rhys Muldoon organised a fundraising night for the orphans of the refugees drowned off Christmas Island, and they asked Darren and me to sing a few songs. It was a Labor Party gathering, so Darren and I racked our brains trying to think of any of our songs that could possibly be construed as having a political or social theme. "All my songs are about girls," says Darren, and all my songs are about men. In the end, we scraped up my Dalton/Lehmann co-write 'Six Hours West', Darren's new duet 'Where Will We Live?' and then boosted our political content by the power of ten by learning Billy Bragg's BETWEEN THE WARS.
I had three days to learn it. It's four chords (1,4,5, with a minor 2 chucked in), but as Andy says, sometimes it's those three- (or four-) chord songs that really get you into trouble. I wonder what it is with those simple songs: it's as though the melody can go all over the place, and a particular note isn't connected to a particular chord. And yet, you must get it right, or else you'll turn it into a different song. BETWEEN THE WARS has three verses, each made up of sixteen lines - four blocks of four lines ever so slightly different in melody and chords. So it was a puzzle at first; now that I've got it, I can hardly remember finding it tricky.
It is a beautiful song. Cramming a song into my head (foie gras style) could have caused me to hate it, but instead my respect for it only increased. Every word, when you're cramming, exacts a whole lot of brain power, and if the word is sloppily chosen, then it is resented. I once learnt The Strokes 'Is This It' for a party, and the lyrics were eighty percent garbage, and as soon as the party was over I duly threw the eighty percent back out of my brain (N.B. I actually really like that song, but it's a shame about the lyrics). Sometimes I think, "Well, I don't write political songs because we live in prosperous, moderate, peaceful times, and there's nothing extreme enough to penetrate my walls and provoke a song." I know that's a weak excuse. BETWEEN THE WARS is a reminder that times like the one we're living in shouldn't be taken for granted. Peace, prosperity and moderation aren't the default settings - they are fragile constructions that need to be protected. The last lines bring tears to my eyes:
"Sweet moderation, heart of this nation - desert us not, we are between the wars." I should try to get my mind off men for a moment and write a song about the world. And after the recent State election, I've decided to join the ALP. 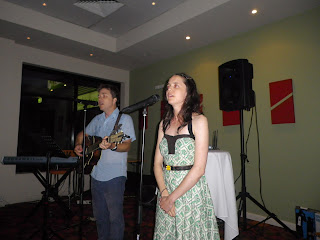 Billy performing on a tv show: